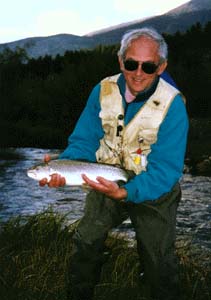 Dear Barry,
I wanted to thank you for the great day in early October at Boxwood Gulch. Your stretch of the Platte was quite beautiful, and although only one hour from Denver was set in an isolated manner in a valley within a mountain pass that could as well been in a remote area.

The day was a bit overcast and I enjoyed casting a dry fly with my 7 foot 4 weight bamboo rod. The section I fished was a small to medium-sized mountain stream with alternating flats and riffles and a fair amount of structure for the fish. There were a few rises, but the trout weren’t where you’d expect them to be in this type of water. There was adequate room for back casts and short to medium casts brought fourth some reactions, mainly from browns in the 12 to 19 inch category. John “Too Tall” Hagen was a sophisticated and patient guide who added to my knowledge of streamcraft. I enjoyed his company. A major surprise were 3 large fish, two brown trout in the 3 pound range, and a dramatic 5 1/2 lb. swedish steelhead that leaped over a rock and was quite challenging on my small rod. I would estimate I caught about 15 to 20 fish in a 7 hour span.

Later, I learned how to streamer fish with my graphite and had success with this technique as well.

I enjoyed this uncrowded day, as well as the efforts of your personnel to make it a great experience and expect to see you again in the coming season.