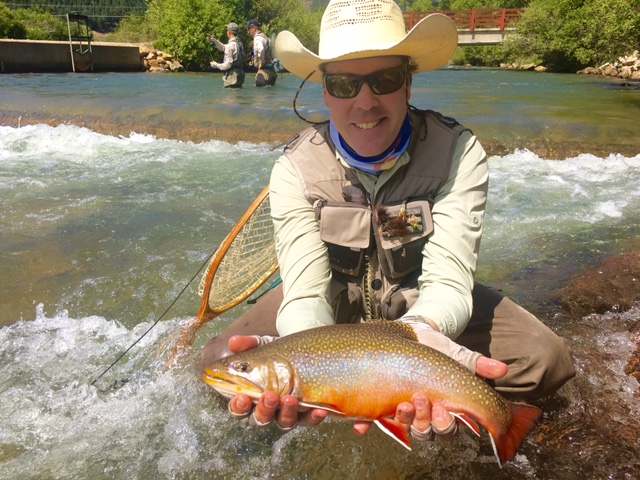 Once again I received so many great pics of huge fish…over 26 inches…that I decided to use this Brook Trout as an example of the quality and variety of fish that can be landed at Boxwood and Long Meadow.
Brian and his son Chase were part of a group of 11 anglers fishing with Blue Quill Angler. Their group landed 197+ fish.  I bet 20 Trout over 24 inches were landed with at least that many breaking off. They landed Bows, Browns, Cutbows, Cutthroat, and Brookies. Large fish of the day was a 30 inch Boxwood Bow. Some anglers reported really huge Trout breaking off 2X tippet with ease.
Hot flies for the day were: Chamois Leech, Blackberry Jam, Red Tungsten Bead Head Zebra, Squirmy Worm, size 22 Midges of all flavors.
Recently I have heard several anglers comment that they fish at Boxwood to tune-up for an Alaska trip. With these kind of fish at Boxwood, maybe it’s the other way around….tune up in Alaska so you have the experience to land some really big Trout at Boxwood.