We opened again on May 1 and we have had great fishing on each trip. Run off has started so we get some off colored water. It clears some by the afternoon. It’s better for catching fish but it doesn’t look as good as the gin clear water we will have later this summer and […] 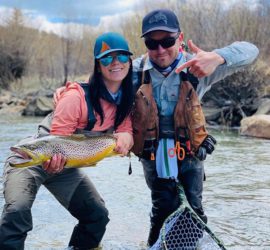 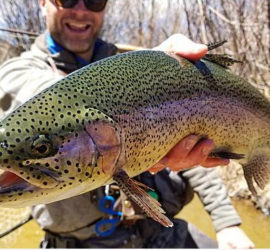 We did some test fishing on April 27. The results convinced us that the fish are ready for a fight on opening day May 1. 2 anglers fished from 11:30 to 4 pm. They landed 30 Trout fishing primarily pink San Juan Worms and egg patterns. They caught Rainbows, Brown, Brooks, Tigers and a Palomino. […]

Not much to report because we have been closed since March 11. No fishing….No pics of trophy fish. Winter just will not end this year. Cold weather and snow coupled with Denver Water shutting off Roberts Tunnel has made for more ice than water. Here we are on April 10, setting up a trail cam […] 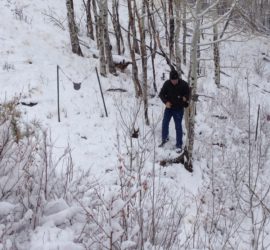 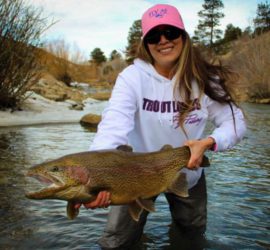 Between snow storms and cold night time temps we had some unreal fishing trips at Boxwood and Long Meadow. A few examples as follows: While the big Bows are usually the longest trout landed, plenty of other large species are caught as well: 24 inch+ Browns, 20 inch Palominos, 18 inch Tigers, 16 inch Brookies, […]

Our 3rd trip of 2019 was quite phenomenal. 6 anglers landed close to 200 beautiful Trout. All 6 species were landed including several 29-30 inch monsters. Tina landed this one at Long Meadow helped with the netting by 5280 guide Gene. Tina has not been fly fishing a lot but she says she is now […] 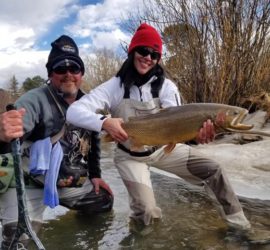 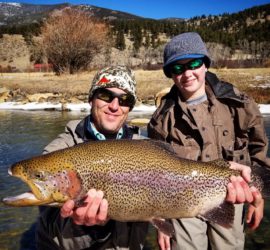 Fishing/catching continues to be excellent especially for Big Trout. Nicole fished at Boxwood with guide Peter, @myflyfishingbuddy, Blue Quill Angler, and landed this perfect CutBow. What a gorgeous fish landed on a size 22! Don’t worry about what flies to bring your outfitter/guide will have all the right stuff. There are only a […] 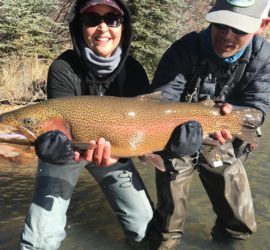 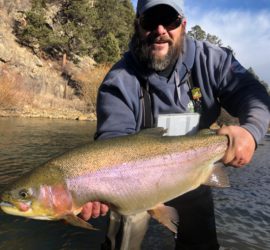 Winter fishing has remained very strong even in a blizzard. Sam landed this 26 inch Brown in the brief blizzard we had a few days ago.The secret fly was a custom tied Zebra Midge that his guide, Tom Caprio,  supplied. Tom guides for 5280 Angler. Their guides are at Boxwood a lot so they know where these […] 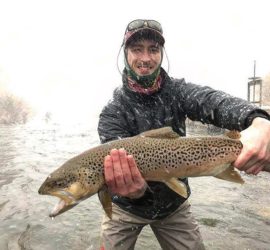 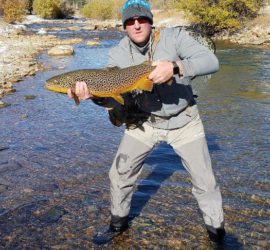 We had  flows of 200+cfs of gin clear water, with most of it from Dillon Reservoir through Roberts Tunnel.The fish loved it. They stayed quite active and willing to play all month. I had numerous reports of 30 inch + fish being landed almost every day….Sometimes 3-4 fish of trophy size on the same trip. […]