Fishing is great.
The following are some Fishing Report results from April.

This is very representative of what you can expect in April. Flow rates were 40-250cfs. The weather was mountain Spring weather…snow, rain, cold, hot,sunny, overcast all during the same day. 20-30% of these fish were caught on the top, the rest were hooked on nymphs and streamers. Your guide will have the correct bugs. 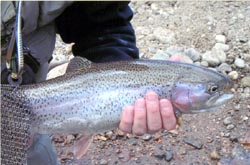