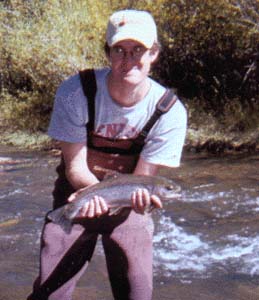 Swedish steelhead. The name meant nothing to me. I had never before caught a steelhead–and will very likely never visit Sweden. But on the upper curve of the oxbow, only forty-five minutes into our morning’s fishing and with a last-shot cast before moving on to the next bend, I hooked into one on a rather plain American nymph.

I have never seen a fish swim so rapidly. With the oxbow running only twenty or so feet wide along that alley and no more than three feet deep, and without any obstructions, I figured strong, calm handling would safely land this fish that, in a flash of the strike and bolt, appeared no better than seventeen inches.

I hollered to Barry that a fish was on. He moved from where he stood upstream with Jim, my partner, and then I lost track of the man. The fish, mostly un seeable, was doing wild and crazy things. It had first shot downstream but then turned up and coursed arrow-like through the current with surprising speed. But that surprise proved mild. After violently showing itself at the surface it dove again to race much faster downstream for fifteen yards, then once again turned dime-wise and shot upstream, toward the right where a fallen log lay. It was like watching the action of a fast invisible underwater trick machine. My tippet sliced quicker across the surface than my eye was used to tracking, and I watched it (my tippet–had only that to watch) as it reached the log along the right bank and then, with only the slightest pause, cut toward the left where the water washed down from the prior level. The fish climbed it. All of this consumed, probably, less than six or seven seconds!

In the short time to follow, Barry, having run past me and above the fish, jumped into the water to scare the thing from secluding itself into the roots and drooping branches of a bank side brush, toward where the fish was deliberately heading. He netted it, then I was able to see just how absolutely fat it was. Twenty-two inches in length (third longest fish I hooked that day), it must have had a girth of thirteen or fourteen inches. Barry informed me this fish would be tripling it’s weight in the next few years, even if it failed to gain an inch in length.

Yet it was the speed of it that had me stunned. Thirty or forty miles an hour, ignoring that there was even water!